WHO WANTS TO BE A CHARACTER? 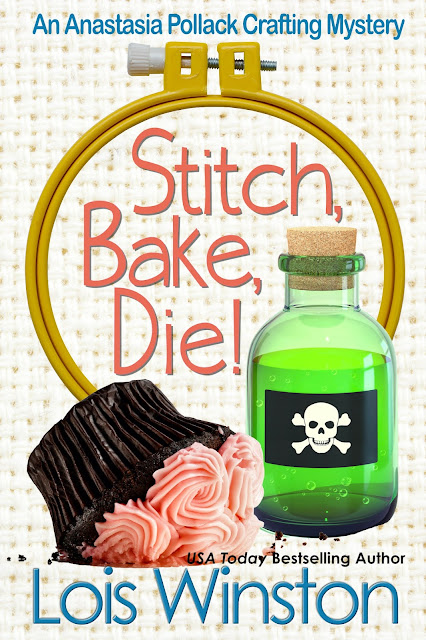 Stitch, Bake, Die!, the tenth book in my Anastasia Pollack Crafting Mystery Series, is now up for pre-order with a release date of October 4th. In celebration of the upcoming release, I’m running a contest for a chance to become a character in the next book in the series. I can’t tell you what the plot of that book is yet because the idea is still incubating in my gray matter. However, I have dropped a few hints about the overall theme of Book 11 in Book 10.

I’ve periodically run a naming contest in the past and have found that readers love them. Some even ask to be the victim or the killer! If you’d like to place your name in the running, all you have to do is sign up for my newsletter. The next issue, which will come out Sept. 7th, will give directions for entering. Of course, I hope you won’t unsubscribe once the winner—or winners—are chosen. I may even wind up choosing more than one name. The winner(s) will also receive a paperback (U.S. residents only) or ebook copy of the book once it’s published next year and be mentioned in the Acknowledgments.

With massive debt, a communist mother-in-law, a Shakespeare-quoting parrot, and a photojournalist boyfriend who may or may not be a spy, crafts editor Anastasia Pollack already juggles too much in her life. So she’s not thrilled when her magazine volunteers her to present workshops and judge a needlework contest at the inaugural conference of the NJ chapter of the Stitch and Bake Society, a national organization of retired professional women. At least her best friend and cooking editor Cloris McWerther has also been roped into similar duties for the culinary side of the 3-day event taking place on the grounds of the exclusive Beckwith Chateau Country Club.

The sweet little old ladies Anastasia is expecting to find are definitely old, and some of them are little, but all are anything but sweet. She’s stepped into a vipers’ den that starts with bribery and ends with murder. When an ice storm forces Anastasia and Cloris to spend the night at the Chateau, Anastasia discovers evidence of insurance scams, medical fraud, an opioid ring, long-buried family secrets, and a bevy of suspects. Can she piece together the various clues before she becomes the killer’s next target?