Today we welcome award-nominated debut mystery author Liz Boeger who writes the Moccasin Cove Mysteries. She describes them as mysteries with a cozy edge, a hint of Southern snark, and always a happy ending. Learn more about Liz and her books at her blog.

I don’t remember being a particularly crafty kid, nor was I a wannabee writer, despite reading most of the Nancy Drew series as a preteen. However, I can trace my concrete-sequential origins back to coloring in the lines and to sorting my box of 64 Crayolas into the proper order before I could even consider any doodling. I had the same issue with LEGO.

Luckily, my artsy side emerged when I was in high school. I was drafted to spray-paint the school’s mascot on the football field before home games. Think of it as a flat mural on grass with thirty cans of spray paint. I still have a couple of watercolor trays from my art classes, both good as new 40+ years later. My artsy interests morphed from painting, to crafting dolls, and stitching needlework in my twenties and during the fraught young parenthood years. That’s also when I discovered the traditional mystery and series that kept me sane.

In retrospect, I think my fabric and books fetishes may be genetic. My maternal grandmother was a single, city girl working in a bookstore before she become a farmer’s wife. During snowy midwestern winter evenings she honed her needlecraft and quilting skills, stitching lovely textiles for her children, and later for her fourteen grandchildren. I still have a few of her unfinished quilt tops and the log cabin quilt she made me for my eighteenth birthday.

My early experimentation with cross stitch was probably inspired by her pillowcases. But the quilting eventually wiggled its way into my creative corner and by the time I was in my mid-forties, I had a full-blown addiction to fabric and freestyle quilting. I say freestyle, because I am not disciplined enough to perfectly match my corners or make my points pointy.

I also took a happy detour into scrapbooking when the craze hit—what better way to enjoy the gazillion photos of our son and family outings. Many years past my son’s childhood, my current project is a collage quilt featuring a sea turtle I am planning for my future daughter-in-law. The planning stokes my creative muscle between writing stints. 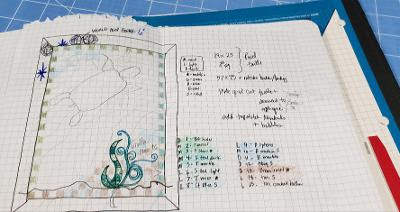 So, what does all this chatter about my artsy-craftsy-quiltsy endeavors have to do with the publication of my first mystery? Crafting and quilting were largely self-taught, like my writing. The creative process gave me the courage and fortitude to experiment. Being a crafter requires risk, and planning, and thinking step by step from start to finish. Just like writing a mystery. The mental and emotional benefits of being a crafter are so tangible, that I’ve instilled some of these talents in my main character Ana Callahan.

Ana is a veteran school principal who spent her entire career moving from one troubled school to another, attempting to turn their failures into success stories. She has a heart for children in impoverished communities, and luckily, her hard work has paid off. But in her demanding career, she’s never had time for relationships nor time to mend her broken heart. Her limited leisure time was devoted to quilting and the occasional dabbling in watercolors. Neither hobby takes up much space and is easily portable for her frequent interstate moves.

By the time she makes her way back home to Florida to turn around the troubled school of her childhood, she’s still single. Then, an interesting man captures her heart, just as she finds herself investigating a murder. But as any school principal will tell you, progress does not come easily. Ana is confident she can save the school but solving a murder and mending a broken heart are not in her skillset.

As an author I felt badly about layering on Ana’s troubles, but that is my job. So, I thought I’d soften the plot blows I’d inflicted by giving Ana time to build a scrapbook and take out her watercolors to ease her pain. In future books I am certain her quilting will emerge, probably with more skill than mine. Such is the stuff of fiction. I wish you happy crafting and hope you have a chance to get to know Ana and the kind folks of Moccasin Cove. 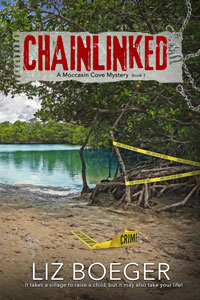 Principal Ana Callahan knows a thing or two about turning around troubled schools, but she can’t fix the grief constricting her own heart. Now she must do both…while solving a murder.

Ana Callahan’s life fell apart, so she went out to save the world, one failing school at a time. Fifteen years later she’s back home in Florida, working her magic on the floundering elementary school of her childhood. But Moccasin Cove is not the sunny, middle-class beach town she left behind. With one eye on her school rescue plan and the other on her exit plan, Ana gets to work and chalks up a few small victories.

Her confidence falters when a school contractor is killed, and a friend is implicated in the murder. An ambitious journalist tries to link Ana’s tragic past to the crime, and a powerful charter school corporation seizes on the political chaos by threatening a takeover of Ana’s school. Adding “investigate murder” to her lengthy to-do list, Ana finds herself paired with the school district’s handsome new security chief. The disturbing secrets they uncover about her friend and the killer’s twisted motives force Ana to admit she has a lot to learn about murder.

Thank you, Lois and Anastasia, for having my on today!

Always a pleasure to have you stop by for a visit, Liz!

Fun post. Thanks for sharing your crafty, creative history, Liz.

Thanks for stopping by, Kass.