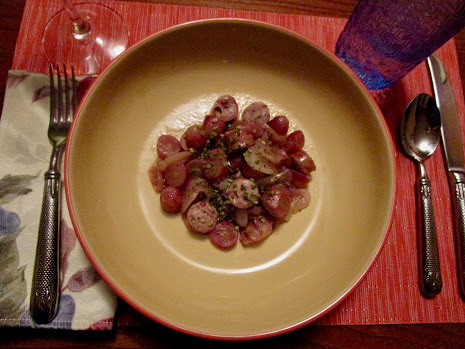 Lev Raphael is the prize-winning author of twenty-seven books in genres from memoir to mystery, and his work has been translated into more than fifteen languages.  In recognition of his stature as an American author, Michigan State University's Library has purchased his literary papers for its Special Archives and updates that collection yearly. Learn more about Lev and his books at his author website and at Write Without Borders.

Nick Hoffman at the State University of Michigan loves to cook and loves to eat. Focusing on food helps keep him centered despite the perpetual chaos in an English department filled with academic jackals snapping and snarling at each other over things as trivial as sharing an office.  And then there are the murders....

Cooking and enjoying a good meal give Nick and his spouse a perfect time-out to reflect and strategize. It makes their well-pointed kitchen an island in a storm of raging egos and all kinds of bad news. Nick is a bibliographer and loves teaching, so the last thing he expected on his bucolic midwestern university campus was a persistent crime problem with himself not only often involved, but worse than that, a suspect. Homicide is something that was only a news item when he was growing up in New York or subject matter for a TV series.

In Department of Death, Nick's life has changed dramatically once again because he's ascended to a position he never wanted: he's now chair of the department, peremptorily installed there by the dean who despises him. Does the malicious administrator have some hidden agenda? Of course. On the way to figuring that out and dealing with the latest suspicious death on campus in a climate of paranoia and authoritarianism, Nick and his spouse eat one of my favorite meals, sausages with grapes and onions. It sounded improbable when I first encountered the recipe, but it's terrific.

My version below is adapted from Melissa Clark's food column in the New York Times. Clark does a lot of roasting; I simplified everything by a switch to stove top prep. This serves four people and goes well with a sparkling wine.

On book tours for the Nick Hoffman series, I've often been asked if I eat as well as my hero. The answer is not all the time, because I don't get to the gym as regularly as he does (and not at all right now. But if Nick prepares or reheats an interesting meal in the series, I've tried it and liked it enough to share it with my audience, which is why Nick enjoys it in Department of Death. 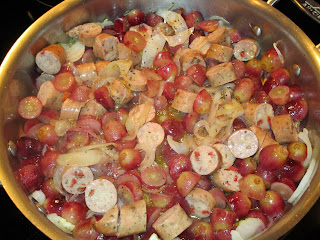 Sausages with Sautéed Grapes and Onions

Toss together onion slices, 2 tablespoons oil, salt and pepper and sauté in a large pan until translucent.

Add grapes, fennel seeds, and the remaining 2 tablespoons oil and cook until the grapes soften.

Add sliced sausages to heat through, and stir well.

Add vinegar and chives to pan and scrape up anything left in the pan, then drizzle the juices over each plate. 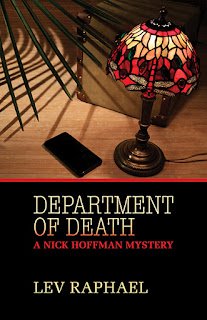 Years ago, Nick Hoffman was given a position in the English Department at the State University of Michigan because SUM wanted to hire his partner as writer-in-residence, but now he's been unexpectedly installed by his dean as chairman of that department. It's a wildly unpopular choice, and he's suddenly the focus of more animosity from his colleagues than he's ever dealt with before. He can't seem to make anyone happy and can't get a handle on his myriad new responsibilities as an administrator, a position he never wanted. Then tragedy strikes again way too close to home: Someone seeking his help is murdered, and under the shadow of another recent murder, Nick is a prime suspect. Hounded by campus police, the local press, and social media, Nick wonders if this could finally be the end of his career. That is, if he manages to stay out of prison.

Thanks for the invitation! I hope your readers enjoy the meal and enjoy the book!

Happy to have you join us today, Lev!

Recipe looks yummy. All I'm missing is the grapes. Adding to my shopping list

Terry, I hope you enjoy it! it was fun to make, and I cook with a big window facing one side of our densely-treed back yard which looks beautiful in every season, thanks to a cluster of hemlocks. So even simple food prep is relaxing and almost zen-like for me. Especially in lockdown.

When I think about how people behave in academia (having been there), it's a wonder we have any colleges or universities left. Love the recipe. Definitely have to try this.

I hope you enjoy it.

BTW, Higher Education lost 650,000 jobs last year.... Massive retrenchment has been ongoing for a long time across the country and I'm sure many schools will close.