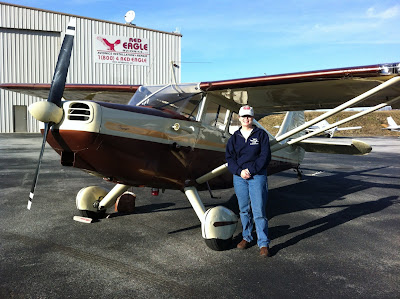 Matty Dalrymple is the author of the Lizzy Ballard Thrillers, the Ann Kinnear Suspense Novels, and the Ann Kinnear Suspense Shorts. Matty lives with her husband and three dogs in Chester County, Pennsylvania, and enjoys vacationing on Mount Desert Island, Maine, and Sedona, Arizona, locations that provide the settings for her work. Learn more about Matty and her books at her website.

My craft was a 1946 Stinson 108: a lovely tailwheel airplane that I purchased when I was taking flying lessons. I had been introduced to general aviation by my husband, Wade Walton, and had progressed from a “pinch hitter” lesson, which trains a non-pilot passenger how to land a small aircraft in case the pilot is incapacitated, to lessons to pursue my own pilot’s license.

It would take many more words than I have in this guest post to relate the full story of my (now concluded) airplane ownership and flying experience, but suffice it to say that when my first novel, Ann Kinnear Book 1: The Sense of Death, came out and I was promoting it while working on Book 2: The Sense of Reckoning—all this while working a full-time corporate job—something had to give, and my direct involvement in aviation had to be grounded.

I’m happy to say that my Stinson craft was never a killer (although it tried a few times). However, with my interest in aviation and my now-full-time career as an author of mystery, thriller, and suspense novels, it was inevitable that at some point a killer aircraft would make an appearance. That happened in Ann Kinnear Book 3: The Falcon and the Owl.

The primary antagonist is Gwen Burridge, an aerobatic and air racing pilot whose husband (Hal), mechanic (Bryan), and a close friend are killed in crashes deemed by investigators to be accidents. However, there is one investigative path that only a few, including Ann Kinnear, have the ability to follow: speaking with the dead.

Hal’s business partner hires Ann to go to the site of Hal’s plane crash in northern Pennsylvania to discover the location of a contract that Hal signed the day of his death. There’s no sign of Hal, but Ann contacts Bryan, and something about the story he tells her sounds not quite right. Ann begins to suspect that none of the plane crashes were accidental.

… consulting with Jonathan Martin, manager of New Garden Flying Field in Toughkenamon, Pennsylvania, about the ins and outs of running a small general aviation airport.

… brainstorming with former Airbus pilot and fellow Stinson owner Bill Lokes about what objects in a mechanic’s hangar could be used as a murder weapon (Bill proved to be alarmingly good at this exercise).

… recalling my own experience of recovering from unusual attitudes (only under the guidance of my flight instructor!) to inform my description of the crash that kills Hal and Bryan.

… making my way through the gatekeepers at the NTSB to talk with an investigator who was only too happy to discuss how an investigation of a small plane crash in a remote wooded area would be conducted (an investigator who was also the lead in the horrifying crash near the Bagram Air Base in Afghanistan of a Boeing 747 jet that stalled when its cargo of military vehicles shifted).

… connecting with aerobatic pilot Matt Chapman, whose performances I have enjoyed at the New Garden Airshow and who spent hours with me on the phone and (pre-pandemic) in his hangar describing the fine points of aerobatic performance.

… chatting with air racing pilot Vicky Benzing, who shared with me the differences between air racing and aerobatic performance—I loved her description so much, I used it pretty much verbatim in my book: “You pay money to race, you earn money when you perform. When you race, all your fellow pilots tell you where you screwed up. When you perform, all your fans tell you how great you are. It’s harder to find a women’s restroom on the racecourse than at an airshow.”

(If you love aircraft and the people who fly them, you can spend an enjoyable hour Googling video of Matt and Vicky at the controls of their gorgeous craft.)

All of these people combined the two characteristics that every fiction author dreams of finding: deep subject matter expertise and enthusiasm about brainstorming how that expertise could be applied in a fictional work: in the case of The Falcon and the Owl, combining their knowledge of (air)craft with my knowledge of the writing craft. I hope you’ll check out The Falcon and the Owl and let me know how we did. 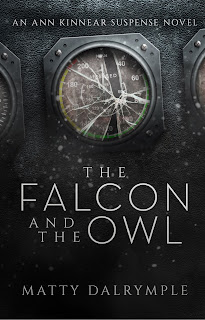 The Falcon and the Owl

A small plane crashes in the Pennsylvania Wilds and only Ann Kinnear has the ability to discover the force that brought it down. Will the secret the victims carried die with them, or come back to haunt her?

Ann Kinnear is indulging her love of aviation by working toward her pilot’s license at Avondale Airport—and protecting her privacy by discouraging the attentions of a filmmaker intent on documenting her spirit-sensing abilities.

Little does she know that a fiery plane crash in the Pennsylvania Wilds will embroil her in a race to track down a contract on which two rivals are banking their futures. And when airshow pilot Gwen Burridge launches a smear campaign against Ann, she is even more determined to uncover the truth.

Ann travels to the crash site and learns what brought the plane down—but it’s only part of the story.

Will Ann land safely, or be the latest victim of a secret someone is willing to kill to keep?

This was so interesting! The conversations you had in brainstorming your books must have been fascinating and fun. I have never been on a privately-owned plane, and I suspect I would be terrified. I don't do well on the big passenger jets, and anything smaller has me quaking in my shoes. Great to live vicariously through someone braver than I!