Terry Ambrose has written more than a dozen books, several of which have been award finalists. In 2014, his thriller, “Con Game,” won the San Diego Book Awards for Best Action-Thriller. His series include the Trouble in Paradise McKenna Mysteries, the Seaside Cove Bed & Breakfast Mysteries, and the License to Lie thriller series. Learn more about Terry and his books at his website.

Five years ago, we visited ‘Iolani Palace in Honolulu. ‘Iolani is the only royal palace in the United States. Once the home of Hawaii’s monarchy, it’s now a museum and teaching center. The story of how this came to be struck a chord within me, and for years I wondered how I could weave the story of Hawaii’s last reigning monarch into a current-day mystery. It wasn’t until I came across a 2011 story from Honolulu Magazine titled Malice in the Palace: The Hawaii Crown Jewel Robbery that I knew I’d found my solution, a true and twisted tale of greed that created the perfect setup for Mystery of the Eight Islands.

Foreign businessmen, mostly Americans, are about to overthrow the Hawaiian government to further their business interests. But that’s only the beginning of the story. In the days following their coup d’état, a man named George Ryan and a few trusted friends commit a crime—not just any crime, but the theft of Hawaiʻi’s crown jewels.

George Ryan was only eighteen when he ran away from his hometown in Indiana. Ryan’s real name was Preston Horner. Few knew him by that name, however, because he used multiple aliases until he died. Ryan was no stranger to the streets, having held odd jobs between his stints at a penitentiary in Oregon and a prison on O’ahu.

Ryan’s notoriety began after he was arrested in Honolulu for carrying a concealed weapon and ordered to leave the islands. Rather than doing that, Ryan stayed on O’ahu. As a foreigner, Ryan was supportive of the coup that removed Queen Liliuokalani from power and joined the reorganized Hawaii Guard. One weekend, while stationed at ‘Iolani Palace, Ryan and a few accomplices went to the basement, found the crown of King Kalākaua, pried all of the gems from the crown, and stole them.

The thieves used an elaborate network of opium dealers and hack drivers (equivalent of today’s taxi drivers) to fence the gems. The detective assigned to the case, William Larsen, spent months following leads and eventually arrested most of the participants. But here’s where things get twisted—most of the thieves were never tried for their roles.

Even Ryan’s charges were reduced to second-degree larceny. A jury found him guilty after deliberating for eight minutes. Rather than handing down a stiff sentence, the judge sentenced him to only three years in prison and a fine of $5,000. While in prison, Ryan received a letter from his sister thanking him for the six-carat diamond he sent her. With the cooperation of the Indiana police, the diamond was recovered, and promptly disappeared after it was returned to Hawaii.

Sadly, most of the stolen gems are lost forever. Today, it would cost millions to restore the crown to its original condition. In a final twist of fate, George Ryan did eventually see justice. After he joined the American Army, he was stationed in the Philippines, where he was discovered digging up buried treasure by locals. Their justice was not so lenient. Ryan’s body was found floating on a raft down a river. He’d been tied to the raft and his hands had been cut off.

The theft of Hawaii’s Crown Jewels provided me with a starting point for Mystery of the Eight Islands. The missing element was a fictional necklace I inserted into the real robbery. The necklace became the glue that brought the story together, tying current-day events with the real events of the 1890s that in many ways seem stranger than fiction.

I hope you’ve enjoyed this post and look forward to hearing what you think about it. 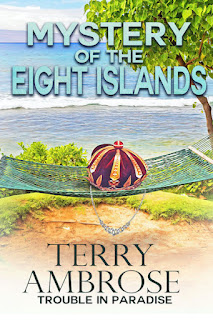 Mystery of the Eight Islands

A Trouble in Paradise Mystery, Book 11

Apartment manager and amateur sleuth McKenna wants a break from solving murders. Too bad his best friend, wannabe PI Chance Logan, doesn’t feel the same. Chance has found a case he thinks McKenna’s going to love—the death of prominent attorney Julian Carr, and the theft of a 125-year-old necklace that’s worth a quarter of a million dollars. Before long, McKenna’s feeling pressured from all sides—find the necklace, solve the murder. Sure. Why not just add save the world?

McKenna’s sure something fishy is going on when he and Chance meet with Julian’s granddaughter about the case. She’s created her own murder board with five suspects. The list includes an unstable, art-collecting veterinarian, a convicted felon, a disbarred attorney, a suspected art thief, and Julian’s new business partner.

As the investigation ramps up, McKenna and Chance see their leads drying out faster than laundry in the tropical sun. The really bad news is they’re not sure they can even find the Eight Islands or solve the murder. For once, McKenna’s worried they just might fail.

Thanks for hosting me today, Lois (or should I say Anastasia?). It's great to be here..

Great story! Intriguing mystery. Thanks for sharing it.

We're both happy to have you, Terry.