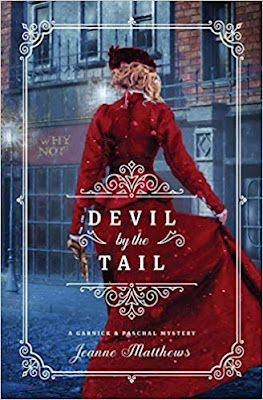 Jeanne Matthews is the author of the Dinah Pelerin international mystery series published by Poisoned Pen Press. Originally from Georgia, she lives in Washington State with her husband and a Norwich terrier named Jack Reacher. Devil By the Tail is her first historical novel. Learn more about Jeanne and her books at her website.

My grandfather was named Gettysburg. That bit of family history has given me a lifelong interest in the Civil War. But it’s the period immediately following the war that most fascinates me – a time when female reformers, suffragettes, and rebellious housewives began to struggle in earnest against the social straitjacket that confined them to their homes.

In the mid-19th Century, married women lived under the law of coverture. They had no separate identity apart from their husband and no legal rights. To be married was to be one person—the man. He controlled every aspect of their lives and the cult of True Womanhood – piety, purity, and submissiveness – kept the wife a virtual prisoner.

Nice women didn’t work outside the home. There were nurses and domestic servants, of course. But according to the Illinois Supreme Court, “The natural and proper timidity and delicacy which belongs to the female gender unfits it for most occupations.” Judged by that standard, the protagonist of my new mystery is the antithesis of the feminine ideal. Widowed and left in the lurch when her husband died without leaving a will, Quinn Sinclair joins forces with an ex-Confederate POW named Garnick to form their own detective agency.

The pair couldn’t have found a more crime infested place or time to hang out their shingle than Chicago in 1867. The city was a boomtown following the war. Immigrants from Ireland and Europe swarmed into the city along with thousands of battle-hardened veterans to work in the stockyards, lumber mills, and factories. Gambling dens and brothels sprang up to relieve these unsettled men of their wages. Drunkenness and prostitution proliferated, and violence was rampant.

Chicago had become synonymous with political corruption during the Republican Convention of 1860. Newspapers predicted that Lincoln would be “Chicagoed” by his conniving opponents and cheated out of the nomination. On the seamier side of town, to be “Chicagoed” meant simply to be beaten to a pulp. In addition to a reputation for corruption, the city was notorious as a mecca of vice. Its most colorful bawdyhouse madam, “Gentle” Annie Stafford, carried a horsewhip to keep order among her clientele while quoting the love poems of Lord Byron.

Chicago attracted an intriguing mix of transgressive females in 1867. Mary Todd Lincoln, another victim of a husband who died without a will, tried to make a home in the city, but she needed money. Desperate and deeply in debt, she arranged to auction off the gowns she’d worn as first lady but ended up causing a scandal.

Victoria Woodhull, who believed in the right of women to marry, divorce, and bear children without social or government interference, traveled to Chicago in 1867 to obtain a divorce. It’s not clear whether she got one or whether she committed bigamy with her next lover, but a few years later she ran for president against Ulysses Grant on a platform of equal rights and short skirts. And Kate Warne, who answered an ad placed in the Chicago Tribune by the Pinkerton Detective Agency, became the first female detective and, probably, the boss’s mistress.

I’d never thought about writing a historical novel, but the more I learned about that “toddlin’ town” in that tumultuous year, the more possibilities I envisioned for a story. It would feature a woman audacious enough to defy convention by her choice of profession and a man unconventional enough to cheer her on. This heroine would venture into the criminal underbelly of the city without being coarsened or compromised and she would maintain her privacy and respectability by using an alias professionally.

My previous novels have included an element of mythology and not even in that department did Chicago disappoint. In January 1867 the famous Italian tragedienne, Adelaide Ristori, performed in a production of Medea at Crosby’s Opera House. In the play as in the myth, Medea takes fiery revenge on her faithless husband by murdering her rival. That gave me my plot. A client of my detectives’ new agency is accused of a similar crime and the scandalmongering, sensationalist press of the era has a field day reporting the crime. With Quinn leading the investigation and Garnick assuming the role of front man to lend “male credibility” to the enterprise, the detectives take readers on a tour of the rough-and-tumble city as it existed before the Great Fire.

Devil by the Tail

What’s a 20-something Union war widow to do in 1867? Start up her own detective agency with a former Reb POW, of course!

Quinn Sinclair, who uses the name Mrs. Paschal professionally, and her wryly observant partner Garnick get two cases on the same day  - one to help a man prove he didn't kill his wife, another to help a lawyer find reasonable doubt that his client killed her ex-lover's new bride. As the detectives dig deeper, they unearth facts that tie the cases together in disturbing ways.

Not least among her worries, someone seems intent on murdering her.

Always good to see your thoughts in print Jeanne!

Hi Jeanne,
Did your family fight in the Civil War?

I have ancestors who deserted from both sides of the conflict. They were farmers and had no patience with fighting a war that made no sense to their lives.

Same here. Family history from those areas was a little fuzzy for that period. The major threads basically highlighted how difficult survival was, and how easily barns burned. Anyway, I loved your book! And I loved your blog. I’m looking forward to the next installment.

The historical background that inspired Jeanne is so interesting.I didn't know about any of it until I read "Devil by The Tail." Such a wonderful book! Hope it turns into a series.