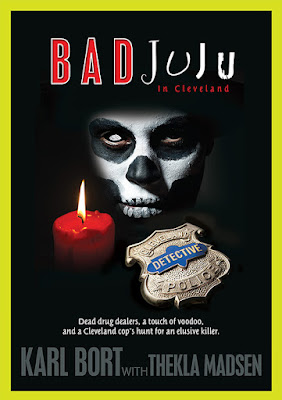 Today we sit down for a chat with crime fiction and thriller writing partners Thekla Madsen and Karl Bort.

Karl: I always had in the back of my head during my career as a cop. I’m an avid reader. When I was working midnights at psychiatric hospital in Cleveland, and I read in People magazine that a popular author started writing when he worked a nightshift – I thought – I could do that! I had an idea for a novel from this guy I arrested and it was so intriguing about the chase and arrest that it would make a great story.

Thekla: I’ve been writing stories since I was a kid and somewhere in my teenage years I thought that I could write a book but didn’t actually get around to it until my early fifties when a mutual friend brought Karl and me together. Karl had a rough draft but needed help to turn it into a book. I read the draft and I loved it; it was the bones of a good story, but it needed to be fleshed out. He hired me as an editor, but I spent so much time researching and writing that eventually he said, “Why don’t you be my co-author?” I said yes, then worked for free after that! We are collaborative partners that work well together.

Karl: From my house in Cleveland, Ohio.

Thekla: From my home office in Wisconsin and my vacation office in Florida.

Karl: I’m not bothered by noise; when I start writing, I put myself in that place and imagine buildings, smells, noise; I’m in that place.

Thekla: I listen to jazz by George Cartwright or piano music by Lori Line and George Winston when I’m writing. I’ll occasionally throw in some John Mellencamp (Mr. Happy Go Lucky) or Bob Segar and the Silver Bullet Band (Greatest Hits) when I need to get fired up.

Karl & Thekla: One hundred percent of the ideas come from real life and a majority of characters or characterizations. With Karl’s experiences as a cop and a nurse, we are able to write stories that you just can’t make up that also have the ring of authenticity despite some truly bizarre situations and characters.

Karl: JuJu was a real person and Nick Silvano – our main character named after my grandson - was made up as a composite of several people I’ve known.

Thekla: We like to name our characters after friends and family members; they get a kick out of seeing characters with their names in our books.

Karl & Thekla: Both. Readers like it when they can identify places or locations where characters live, work, play….and commit murder.

Karl: JuJu and Voodoo – he was a true believer

Karl: Through my research I learned a lot about voodoo  – voodoo is a combination of many religions and I don’t dismiss it like I did before. I’m an overachiever – as I get older, I find there’s always new things to try!

Karl: The Sum of All Fears by Tom Clancy. It was exciting and the characters were put in the right place.

Karl: Trust in the news media and politicians

Karl: My wife, children/grandchildren, and food for everyone

Karl: Unloading boxes of candy in a warehouse.

Karl: Anything by Louis L’Amour

Thekla: Gone With The Wind by Margaret Mitchell

Thekla: Both with emphasis on country

Karl & Thekla: We’re almost finished with our third novel in the Detective Nicholas Silvano Crime Thriller series. Bad JuJu and the Eye of Oya is expected to be available in early 2022.

As a Cleveland Police detective, Karl Bort worked eleven years in Narcotics with a two-year stint assigned with the DEA and was elected to serve as the President of the Cleveland Police Patrolmens Association. After 27 years of police service, he retired and went to nursing school and worked as a psych nurse for the Cleveland Clinic for a number of years. Karl had his essay "Cops and Donuts” published in the Cleveland Plain Dealer and was interviewed on Cleveland.com. You can find Karl on Facebook.

Thekla Madsen is a business and marketing writer from River Falls, Wisconsin. She was executive editor of a Minnesota/Wisconsin women's magazine and has had articles published in trade magazines. Thekla is a member of the Twin Cities (Minnesota) chapter of Sisters in Crime. Her short story titled “It Never Ends Well” was included in the Twin Cities Sisters in Crime chapter anthology Minnesota Not-So-Nice: Eighteen Tales of Bad Behavior published in Fall 2020.

The pair works together via email and phone calls from their respective cities and didn’t even meet in person until after their first book, Bad JuJu in Cleveland, was published. Together with their spouses, Karl and Thekla met a few years ago for the first time in Marathon, Florida where they shared a tiny condominium and worked on their second book, Angry Nurse.

Drugs….murder….voodoo! Four men are found brutally slain in an abandoned house on Cleveland’s east side, one with ties to City Hall and all marked with a mysterious symbol. When Detective Nicholas Silvano is called to the case, he finds this drug-deal-gone-wrong is anything but ordinary and the search for an elusive killer is on. With FBI Agent James Reis creating roadblocks at every turn, Silvano teams up with DEA Agent Charley Goetz on a manhunt that takes them from Cleveland to the shady side of Florida, where anything can be had for a price. The stakes become higher when the killer makes it personal, forcing Nick to face feelings he’d been denying for so long.