INTERVIEW WITH JUDITH ANDERSON, CHIEF OF POLICE FROM AUTHOR KASSANDRA LAMB'S C.o.P ON THE SCENE MSYTERIES 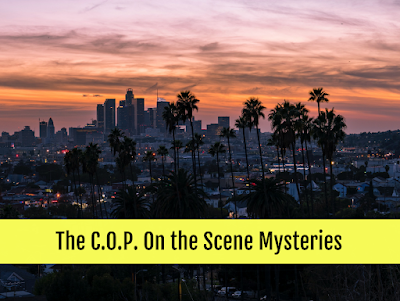 Today we sit down for a chat with Judith Anderson, Chief of Police from author Kassandra Lamb’s The C.o.P. on the Scene Mysteries.

I had a good life in Maryland, as the head of a homicide unit in the Baltimore County Police Department. Granted I was frustrated with the bureaucracy, and some recent events had made me, let's say, a bit discontent.

But then Kassandra took advantage of that discontent and maneuvered me into chucking everything and moving to Florida. Granted, the chief of police position in the small city she invented was very enticing. I didn't quite realize what I was getting myself into, though.

My self-reliance. I can take care of myself in just about every situation.

Um, I guess sometimes I'm a little too independent. I have trouble letting people in.

That's easy. I'm not even two weeks on the job down in Florida, and she sics a serial killer on me.

I haven't before, but I was just a secondary character in her other series about Kate Huntington, the psychologist I've consulted with on some cases. Now that Kassandra is focusing on me, I need to pay closer attention to what she's up to. So I can object when she's about to land me in a mess.

Boy, you ask tough questions. I suppose my greatest fear is having to admit that I can't handle something.

Well, Kassandra hasn't filled in all the details yet, but she's given me this rather dark back story, with a wife-battering father and an unstable, suicidal mother.

Ha, I guess that's why I'm so cussedly independent. But if I was doing the writing, I'd give myself a more pleasant childhood. *shrugs* Of course, then I might not be me. Not sure how I'd feel about that.

The mayor of the city of Starling. He and the City Council Chair hired me. Councilman Hayes is a sweetheart, but Mr. Mayor, not so much. He's always screaming about "optics." Politicians are definitely not my favorite people.

I can't imagine trading places with any of them. I like being the boss. But I wouldn't mind trading personalities with one of my detectives. He's very easy-going. I wish I could roll with things as easily as he does.

Well, maybe I'd be willing to trade places with Sheriff Sam...Sam Pierson. He's the sheriff of the rural county just north of Starling. Most of the time, his job is a lot calmer than mine. He's been, um... *cheeks flushing* ...a good ally.

She's a Maryland native, as well, who has moved south for the warmer climate. Now she has half her characters doing the same thing. I guess she likes Florida.

But online she hangs out at her website and she blogs on her small indie press's website.

I'd liked to get a bit more settled into this new job and city before another big case comes along. But something tells me that Kassandra isn't going to give me much of a break. She said she wanted to write police procedurals partly so she didn't have to make up reasons why an amateur sleuth keeps getting involved in murder.

And Starling is just southwest of Jacksonville---a big city with all the usual big-city problems. Those problems tend to spill over onto my city at times. I've heard rumors that there's a sex-trafficking ring operating in the area, and I have a bad feeling they're going to bring trouble our way. 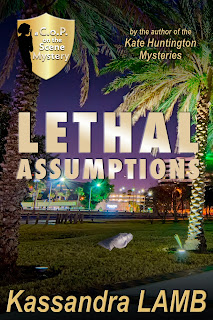 Judith Anderson’s no-nonsense attitude and confidence served her well in her climb to homicide lieutenant in the Baltimore County PD, but that confidence is shaken when she finds herself one step behind a serial killer—just eight days into her new job as Chief of Police in a small Florida city.

With a leak in her department, she doesn’t know whom to trust. If she makes the wrong assumption, the wrong decision, it may be her last. In a race to save lives, she’ll draw on every talent and instinct that made her a star in Baltimore. But will that be enough this time?