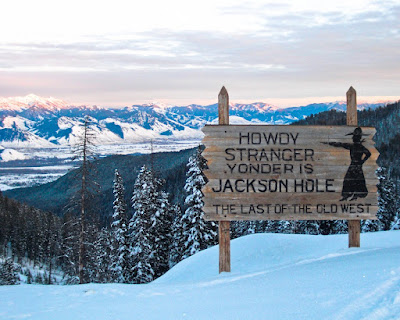 Sue Pepper writes cozy mysteries set in the Pacific Northwest where she lives with her two kids, fuzzy yellow dog, and real-life action hero husband. A former resident of Jackson Hole, WY pushed out by the billionaire-caused housing crisis, she enjoys writing revenge and redemption for the fictional residents of her Jackson Hole Moose's Bakery Not So Cozy Mystery series. Learn more about Sue and her books at her website.

How My Years in Jackson Hole, Wyoming, Influenced My Books

My family lived in Jackson Hole, Wyoming, for three wonderful years. Calling the famed tourist destination on the outskirts of Grand Teton and Yellowstone National Parks home had its difficulties. The cost of living was astronomical and trying to park downtown during tourist season was impossible, but the nearby natural wonders and vibrant, close-knit year-round community made it worth it.

We left because stable housing was financially unattainable, which is why most people have a difficult time staying there. While we’re now happy in the Pacific Northwest, we miss Jackson dearly. When I started brainstorming my new mystery series, I immediately knew I wanted to reconnect with Jackson Hole by making it the setting. The current housing crisis is at the center of each of my mysteries, and the tension between second and third homeowners, the strained local workforce, millions of tourists a year, wildlife, conservationists, and developers provide lots of inspiration for plot.

Jackson is beautiful in all seasons­–the brief, shining summer, the brief, colorful fall, the long cold and snowy winter, and the muddy, rainy spring. My goal for the series is to write a book in each month of the year, connecting it to what it’s like to live in Jackson as a local year-round. The first book, Mountain Town Murder, happens in October and culminates on Halloween.

I set Hot Springs Murder, the second in the series, in January when Jackson Hole transforms into a snowy wonderland. Yearly accumulating more than 400 inches of snow, Jackson is a destination for downhill skiing, snowmobiling, fat biking and cross-country skiing. Town square transforms into a winter wonderland with an ice-skating rink and warming shelter, while tiny lights are strung in the signature antler arches and the trees, lighting up the long nights.

The hot springs in my book are fictional but are based on Granite Hot Springs south of Jackson in Hoback Canyon. In the summer, you can drive up the forested road to visit them, and even camp nearby. In the winter, the hot springs are a snowmobile, cross-country ski, fat bike, or dog sled away. The natural 112-degree spring water is perfect for soaking after a day on the slopes at one of the three nearby ski resorts, including Snow King Mountain, which overlooks the town of Jackson.

My series protagonist, Sadie Moose, owns the fictional local landmark Moose’s Bakery just off the Jackson town square. I based her bakery on three of my favorite local coffee shops, all places I’ve sat with my laptop as I dreamt up this career I’m currently enjoying. Moose’s has the vibes of Cowboy Coffee Co., location of Persephone Bakery, and knotty pine cabin look of Jackson Hole Roasters. All three are excellent and worth a stop if you’re ever in town.

Having the license as an author to take inspiration from multiple places, move things around to fit my narrative, and make things exactly how I want them to be is so much fun. The opportunity to show an unseen side of an often-visited place through my work is very satisfying. More reasons I love writing! 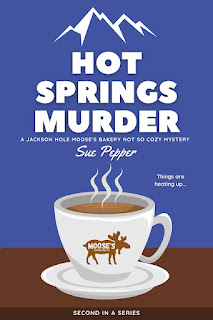 A Jackson Hole Moose’s Bakery Not So Cozy, Book 2

Things are heating up...

Sadie Moose is enjoying a romantic evening in a snowy moonlit hot spring with her new boyfriend when a dead body floating in the pool interrupts their steamy interlude.

Yes. Another dead body. But she is absolutely not getting involved this time. She has enough to do with a business expansion underway, her new renters, and her new relationship.

Except the chief suspect is the troubled grandson of one of the regulars at her bakery in Jackson Hole, Wyoming. She promises she’ll ask some questions to keep him out of jail. And then her new barista is a neighbor of the deceased, and she’s having a hard time sleeping thinking someone in her tight-knit neighborhood is a murderer. So Sadie asks a few more questions.

Soon, she’s embroiled in the investigation, with danger lurking around every snowy corner. With help from her sexy boyfriend, rowdy bakery crew, a maybe-mob-princess, and her trusty canine companion, Tyrone, Sadie must clear the mist surrounding this mystery, before the killer boils her, too.

Thanks for having me on your blog!